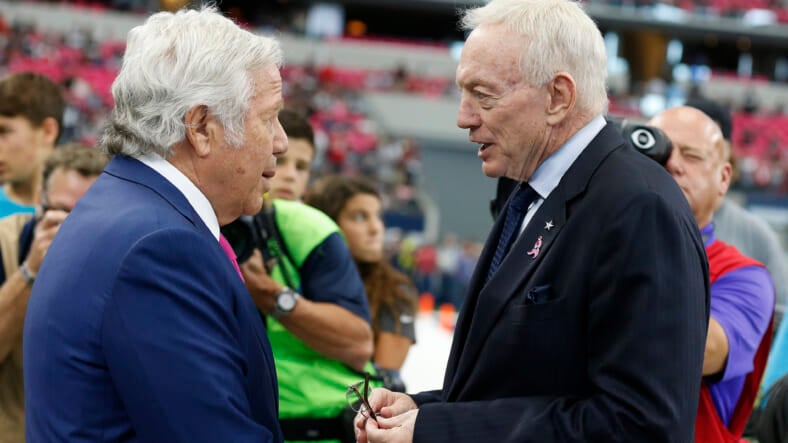 League owners are about to vote on NFL Commissioner Roger Goodell’s contract terms and tensions are reportedly beginning to mount between two of the league’s most prominent team owners. New England Patriots owner Roger Goodell and Dallas Cowboys owner Jerry Jones allegedly engaged in a heated, verbal altercation recently, according to reports. Sources told ESPN that Jones was a lone wolf holding out support for certain terms in Goodell’s contract talks, and reportedly tried to leverage his power by telling Kraft, “Don’t f— with me.”

Jones is accused by ESPN of doubling down and saying, “Don’t mess with me.”

Neither a spokesperson for the Cowboys nor the National Football League has offered a comment on the incident. Jones’ history of speaking out in opposition of Goodell receiving new contracts dates all the way back to 2017. That year, the commissioner received a five-year contract that was structured differently in comparison to the deals that preceded it. The structured difference was reportedly due to Jones taking initiative, turning his usual salary to bonuses that are based off of performance.

Officials say that Jones has expressed concerns over Goodell’s latest contract, believing that the performance-based bonus pool will not be as thorough or specific as the last deal.

“He believes in corporate good governance and wants accountability on the financial goals tied to Roger’s bonus,” a league source reportedly told ESPN. “He is sensitive to awarding a big bonus to Roger before he performs and earns it.”

Goodell has held the position of league commissioner since 2006, and the majority of team owners have reportedly been pleased with how he’s carried himself up to this point. The commissioner led the way in the NFL ultimately adding an additional game to the regular season as part of a 10-year collective bargaining agreement with the NFL Players Association. During the 2020 COVID-19 pandemic period Goodell ensured that not a single regular season game was cancelled due to virus outbreak.