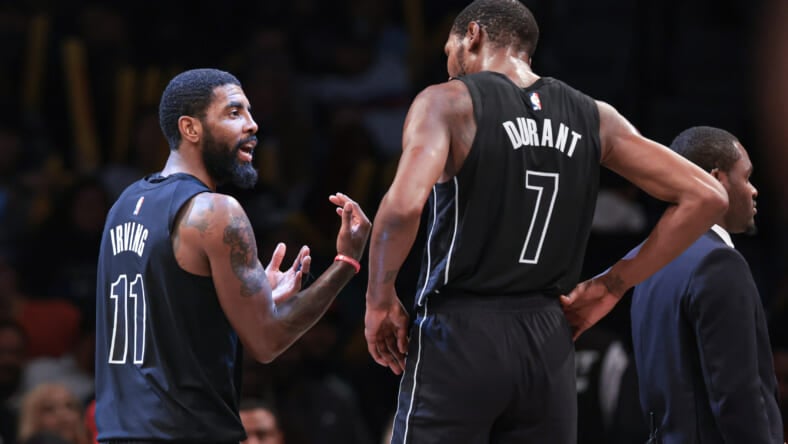 As Kyrie Irving continues to work his way back from his four-game suspension, at least one official believe that Irving has played his last game in the National Basketball Association. An NBA general manager reportedly told Sam Amick of The Athletic, “I think Kyrie might not play in the NBA again.” Irving is currently serving a four-game suspension for allegedly retweeting a film that contained antisemitic material, and not quickly disavowing antisemitic views when initially asked by reporters.

Other Executives questioned by Amick expressed contrary views about Irving’s future in the league. However, only one of the front-office heads, in addition to six other executives, displayed any level of interest in adding the veteran talent to their team’s roster.

“He will not be on (our team), but someone will (want him). They always do for his talent,” said an official.

In addition to the suspension, Irving is required by the Nets to complete a road map consisting of six tasks before he is allowed to return to the team this season. The tasks include apologizing or condemning the movie he promoted on social media, donating $500,000 to anti-hate causes and completing sensitivity training. Additionally, Irving must also complete antisemitic training, meet with the Anti-Defamation League and other Jewish leaders and meet with owner Joe Tsai to demonstrate a better understanding of the topic.

NBA Commissioner Adam Silver, who is reportedly Jewish, is demanding to meet with Irving this week. NBPA VP and Boston Celtic forward Grant Williams said the union will be holding a meeting soon. When speaking to MassLive, the union VP spoke briefly about the pending meeting, and how the expediency of the Nets and NBA adequately handling the issue have left them with little to discuss on that subject.

The next time Irving can return to the court if he completes the six tasks will be on November 13th when the Nets are scheduled to play against the Los Angeles Lakers.