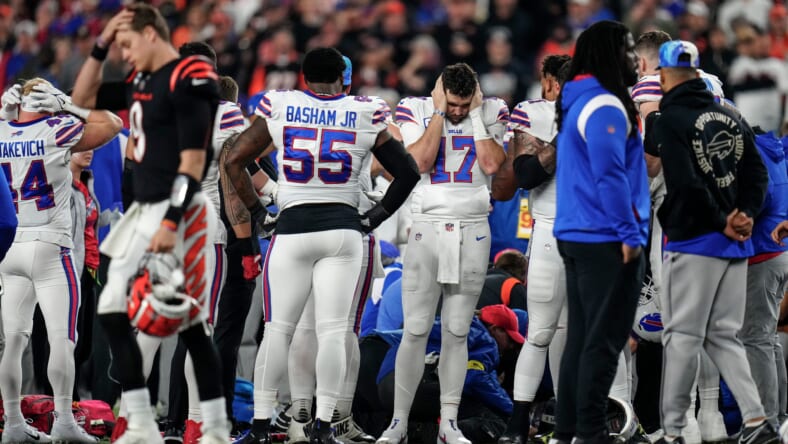 Doctors from the University of Cincinnati Medical Center gave a promising update on the medical condition of Bills safety Damar Hamlin Thursday, saying Hamlin has made “substantial improvement.” Hamlin, who went into cardiac arrest on the field during Monday’s game against the Bengals, was revived twice, once on the field and once at the hospital, according to his Uncle. Hamlin’s uncle also said that Damar was less reliant on oxygen and breathing more than half the time on his own. Thursday, the Buffalo Bills reported major improvements, saying Hamlin had opened his eyes and was neurologically intact.

Hamlin, who was put to sleep to be intubated with a breathing tube, still remains in critical condition but is now no longer asleep. He is responding to commands and questions, according to doctors, who spoke via Zoom in a press conference Thursday.

Hamlin cannot speak because of his intubation, however, doctors say that one of his first questions to them in writing was an inquiry asking whether the Bills won the game against the Bengals.

“Yes, you won the game of life,” was the response.

Doctors say the quick response of the Bills training staff and other medical personnel helped save Hamlin’s life.

Hamlin is believed to have suffered commotio cordis, a blunt trauma impact to his chest at the exact moment his heart was between beats which may have thrown off his electrical heart rhythm and put him into cardiac arrest. Hamlin’s heart stopped and he was technically dead at Paycor Stadium until Bills assistant athletic trainer Denny Kellington revived him by administering CPR and medical personnel helped with other lifesaving maneuvers. Kellington’s quick response is being credited by players and reporters with not only saving Hamlin’s life but hopefully helping him avoid serious neurological damage.

Commotio Cordis is an extremely rare cause of death that very few survive unless they are given CPR within minutes. The survival rate for a person revived within three minutes versus a person revived later is drastically different due to the time the patient is left without oxygen to the brain. It can often result in brain damage, lung damage and neurological damage even when people survive. The trauma often happens during sports such as when a baseball hits someone in the chest. Hamlin collided with Bengals player Tee Higgins and the timing of it sent him into cardiac arrest.

“Obviously it’s been hard just because I had something to do with it,” Higgins told reporters. “Everybody’s been making me feel whole again, and I talked to his mom and everything’s OK – he’s doing good, so I’m in a good place right now.”

The rarity of the condition is attributed to the fact that the impact to the chest wall must happen at the exact time the heart is in between beats which is usually measured in milliseconds.

The doctors stressed that Hamlin’s road to recovery will be long.