Some heavy Name, Image, Likeness questions arose when news broke that Deion Sanders had reportedly influenced one of the top recruits in the class of 2022, Travis Hunter, to commit to Jackson State where Sanders coaches. Hunter, a cornerback, was expected to go to Florida State and was committed there since 2020 but now Hunter will be dropping to a FCS level to play for Sanders at an HBCU.

Hunter is rumored to be on the verge of signing an NIL deal with Barstool Sports reported to be worth a million dollars or more but this is speculation as of now. Sanders works for Barstool. Furthermore, Barstool is owned in part by PENN gaming and the platform itself promotes gambling activities at times.

Was the alleged Barstool deal connected to Hunter’s decision to commit to Jackson State? Maybe yes, maybe no. Draw your own conclusion there. But if it was, it could be a violation of Mississippi’s new Name, Image and Likeness law if certain conditions are met.

Perhaps it was not a deciding factor and Hunter gains an advantage by playing for Sanders because of how marketable the relationship between the former NFL player and the purported No.1 recruit is. Sanders could provide tremendous mentorship and coaching value to Hunter. Also, Hunter may stand out more playing for the HBCU than a traditional D1 where there are many great players. So clearly, the alleged Barstool offer could be connected to many factors. But what would make it sticky, is if the reported Barstool NIL deal was contingent upon Hunter flipping and committing to Jackson State. If so, it would be considered an inducement. So far though there is no evidence of this.

In Mississippi where Jackson State is located, the new NIL state law prohibits a school or third party licensee from offering an athlete compensation or any NIL deal as an inducement to get the athlete to commit to that school. In other words, no parties connected to the school are allowed to offer any deal to Hunter in order to get him to commit to a specific university . However, if Hunter was offered a deal for other reasons, especially if he was offered one after committing then it could be totally fine.

A few things here. There would need to be evidence to prove that either Barstool, Sanders or Jackson State used the alleged Barstool deal to sway Hunter for there to be a violation. Man, that’s pretty hard to prove, unless there’s a paper trail and who would even investigate it?

Next, the Mississippi law has zero language related to enforcement, discipline or even which association or agency, for example a state agency or the NCAA, is responsible for handling violations. The state can’t make the NCAA enforce its local law and the NCAA right now wants NO part in getting into lawsuits or trying to enforce laws that vary state to state and are brand new. NCAA has already made it clear it is deferring to the states and advocating for a uniform federal law because the various state laws are totally overwhelming the organization. The last thing the NCAA wants right now is more litigation after the Supreme Court decision. It is clearly scared to begin enforcing dozens of different local laws that may change anyway if a federal law is passed. So, it’s in a holding pattern. Enforcement is really up to the states.

There is seemingly no teeth to the Mississippi law because no punishment is spelled out. Maybe the NCAA would enforce its own policy which does prevent athletes from endorsing gambling, but in the event that there is a deal, Barstool could also ensure that Hunter’s participation is not related to its gambling activities or promotions.

What’s so unfair and bizarre is that the laws vary state to state when it comes to NIL. Therefore, in states like Alabama, a provable violation of the NIL state law can carry criminal penalties under some circumstances, but in Mississippi there is no language regarding what happens when you violate the law. The NIL landscape is a mess right now and companies and recruits are prime to take advantage of it, especially if they have lawyers backing them.

We reached out to Dave Portnoy for comment on this story to get Barstool’s take but so far have not heard back. 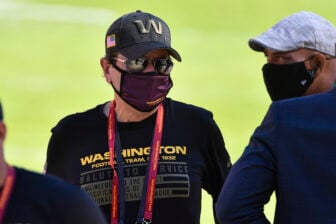