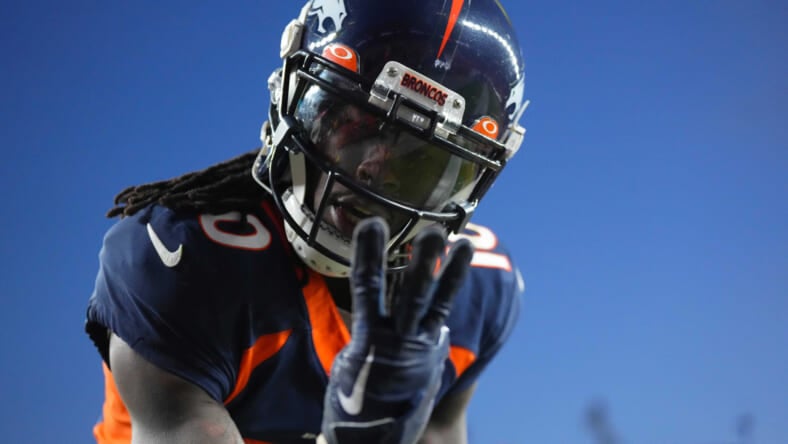 Denver Broncos wide receiver Jerry Jeudy was fined $23,030 for making contact with an NFL official and $13,000 for taking off his helmet on the field during the Broncos’ loss on Sunday to the Kansas City Chiefs. The total fine is $36,281 for unsportsmanlike conduct.

The contact occurred when the Broncos were trailing 27-0 in the second quarter. Jeudy was visibly frustrated with the official when the official did not call a holding penalty. The Chiefs were ahead by a large margin when Jeudy allegedly screamed in the official’s face and physically bumped into him. Normally, an official would’ve called an unsportsmanlike penalty and/or ejected Jeudy but the move did not draw any penalty and Jeudy played the rest of the game.

The NFL followed with the hefty fine but according to the NFL Network, Jeudy won’t be suspended.

Jeudy was the 15th overall pick out of Alabama in the 2020 draft. At Alabama, he was first-team all-pro in the SEC twice and he won a national championship in 2017. He was selected by the Broncos and he has been with the team his entire three-year career. This season he has 587 yards and six touchdowns.

Following the Broncos loss on Sunday, they team moved to 3-10 on the season and are tied with the Chicago Bears for the second-worst record in the NFL. Since the team traded Russell Wilson in the offseason, the Seattle Seahawks now possess their first and second-round picks for the next two seasons.