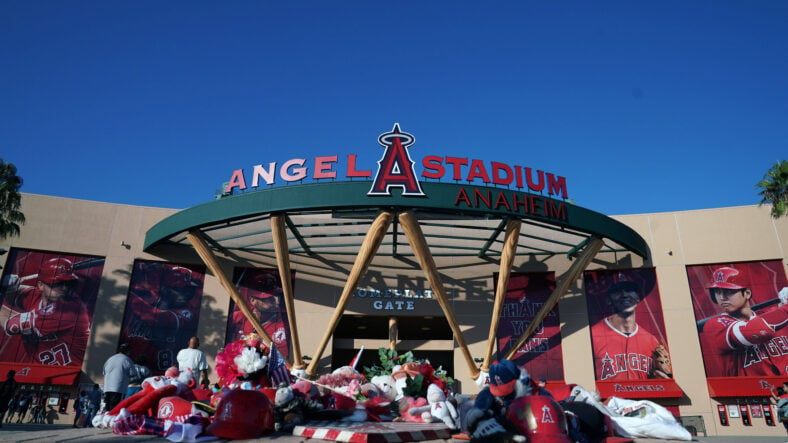 Aug 27, 2019; Anaheim, CA, USA; Detailed view of a memorial for Los Angeles Angels pitcher Tyler Skaggs at Angel Stadium of Anaheim. Skaggs, 27, died at a hotel in Southlake, Texas, July 1, 2019, where he was found unresponsive prior to a game against the Texas Rangers. Mandatory Credit: Kirby Lee-USA TODAY Sports

Former Los Angeles Angels staffer, Eric Kay, is set to face prosecution in Texas for allegedly supplying drugs to Angels pitcher Tyler Skaggs, who died of an overdose in 2019.

In Skaggs’ death, Eric Kay is charged with drug distribution and drug conspiracy. In a trial that has been postponed several times, jury selection was set to start today.

In criminal filings, federal prosecutors claim that from at least 2017 to 2019, Kay got oxycodone tablets from multiple sources and supplied them to Skaggs and others. Prosecutors claim Kay took the tablets as well.

Skaggs, who was 27 at the time of his death, was discovered dead in his Dallas hotel room on July 1, 2019, just days before the start of a series against the Texas Rangers. The first game had to be rescheduled.

Skaggs choked to death on his vomit, according to a coroner’s report, with a lethal mix of alcohol and the opioids fentanyl and oxycodone in his bloodstream, which Kay is accused of supplying.

On the government’s witness list are five major league pitchers and former Angels infielder C.J. Cron. According to court documents, the majority of witnesses would testify that Kay delivered narcotics to Skaggs and others.

Garrett Richards, a player with the Boston Red Sox organization who spent his first eight big league seasons with the Angels, would testify that Kay once asked him for unused oxycodone pills, according to prosecutors.

Kay got oxycodone pills through different sources and occasionally even had them delivered to the Angels’ home stadium. A substance that was confirmed to be oxycodone and fentanyl was found in his office at work, the archives say.

The federal recording said Andrew Heaney, a member of the New York Yankees and one of Skaggs best friends, confirmed his intention to reach Skaggs the day he was found dead as well as interactions among Kay and Skaggs.

As said in the court filings, Kay spent with up to a month in drug recovery from oxycodone addiction beginning in April 2019, more than two months before Skaggs passed away. Kay was on that outing to Texas when Skaggs overdosed.

Skaggs pitched in 79 innings and recorded 78 strikeouts in the 2019 season. A supplemental first round selection for the Angels in the 2009 MLB draft, the left-hander was traded to the Diamondbacks just a year later, in an exchange for pitcher Dan Haren.

Skaggs made two consecutive appearances at the All Star Futures Game in 2011 and 2012.

Stay tuned to League of Justice for more updates on this case.