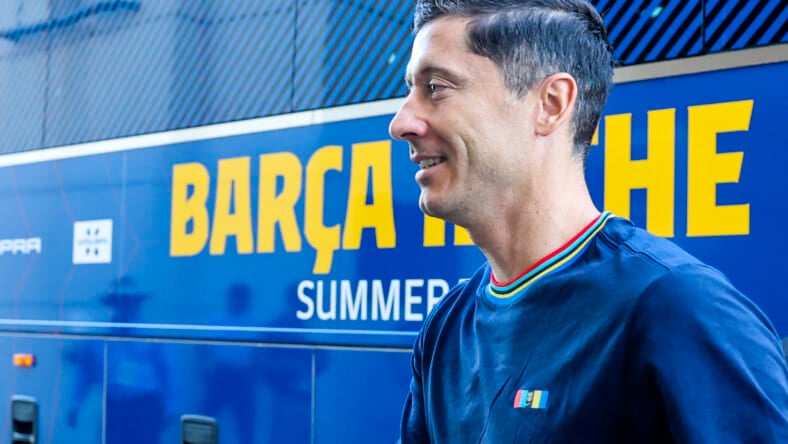 FC Barcelona reportedly intends on appealing the three-game suspension imposed on Robert Lewandowski. During Barcelona’s game against Osasuna, Lewandowski allegedly made a gesture towards game official Gil Manzano. Manzano gave the striker two yellow-cards, which by rule would only warrant a one-game suspension.

After further investigation, officials concluded that Lewandowski’s gestures at Manzano were likely the player suggesting that the referee’s officiating of the game was suspicious. As a result, the striker’s suspension increased from one-game to three-games. Lewandowski will miss games against Espanyol, Atletico Madrid and Real Betis if FC Barcelona’s appeal is denied. The team issued a statement declaring its intent to bring the appeal before the Appeals Committee.

“FC Barcelona will put their case to the Appeals Committee in view of the three game ban handed out to Robert Lewandowski by the Disciplinary Committee. The Polish striker received the suspension after being sent off for a second bookable offence in the 2-1 win over Osasuna in Pamplona in La Liga.”

Lewandowski reportedly is considered to be one of the most prolific goalscorers in the world, after scoring over 500 goals in his career. The Poland international has seen success in multiple “big time” games such as the Champions League, UEFA Super Cup and ten Bundesliga titles. The majority of these triumphs came while playing for Bayern Munich, who he joined in 2014 from bitter rivals Borussia Dortmund. Additionally, Lewandowski has also won the 2021 Ballon d’Or Striker of the Year, along with the European Golden Shoe in years 2021-22.