Drew Brees Caught On Video Allegedly Being Struck By Lightning While Shooting Commercial, Local Reports Call It A Spoof 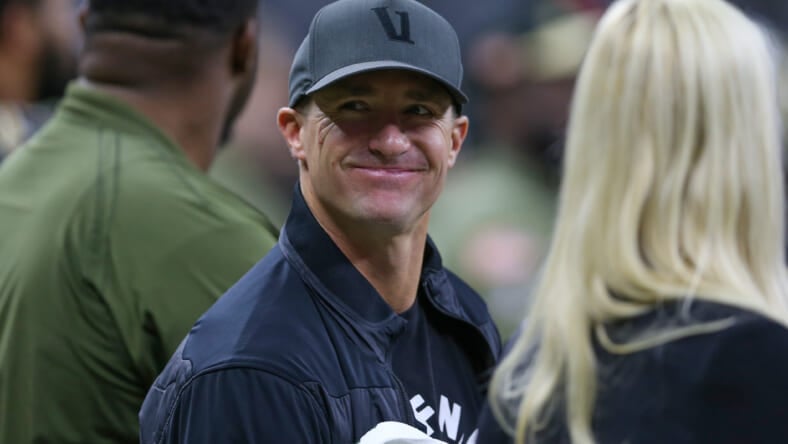 UPDATE: Drew Brees posted on social media, stating that he is okay while also making an Atlanta Falcons joke.

Former New Orleans Saints quarterback Drew Brees was reported to be allegedly struck by lightning while in Venezuela shooting a commercial video for PointsBet Sportsbook, according to Pro Football Talk. The incident was reportedly caught on video and tweeted by a filmmaker overnight who said it happened while they were filming a commercial. Brees tweeted earlier in the week that he was excited to be flying to a “top-secret location” to film a promotional video.

Brees reportedly was filming the video at the Catatumbo River. The Catatumbo River is home to a never-ending lightning storm of up to 9 hours a day, up to 300 nights a yr w/ strikes up to 28 times per minute. Local news says lightning usually hits the river and rarely people but approx. 3-4 people a year die. A filmmaker who was allegedly on scene tweeted the very realistic looking video that shows an alleged strike over the filming area but does not show whether Brees was actually hit.

PointsBet Sportsbook issued a statement regarding the Brees incident.

“We are aware of the media coverage regarding PointsBet brand ambassador Drew Brees. We are in communication with Brees’ team and will continue to monitor events throughout the coming hours. At this stage we will not be making any further comment.”

The promo is allegedly for a new “lightning Bets” feature. Nick Underhill of NewOrleans.Football gave an update on the ex-quarterback stating that he was doing fine and a local reporter for ESPN also said Brees texted her that he was fine and did not get struck. Local media are reporting that the tweet was a spoof and people are speculating that it may be a marketing ploy by PointsBet to get publicity for its new Lightning Bets feature.

Brees has yet to confirm whether he was struck by lightning or the video was part of a stunt.

In his first year in New Orleans after being released from the San Diego Chargers (currently named Los Angeles Chargers), Brees reversed the fortunes of a team that had gone 3–13 the previous season. The future Hall of Famer led the Saints to a 10–6 record in 2006 and a berth in the National Football Conference (NFC) championship game.

While playing in head coach Sean Payton’s innovative offense, he led the league in passing yards that year and was named first-team All-Pro for his efforts. In 2008 Brees threw for over five thousand (5,069) yards—15 fewer than Dan Marino‘s single-season record—and was once again voted to the Pro Bowl.

In 2009 Brees had another Pro Bowl season and set an NFL record by completing 70.6 percent of his passes. More significantly, he led the Saints to a franchise-best 13–0 start and the franchise’s first Super Bowl berth, a victory over the Indianapolis Colts. In the Super Bowl, Brees not only completed 32 passes for 288 yards and two touchdowns, but also was named Super Bowl MVP.

Brees retired after the 2020 season, following a loss to Tom Brady and the Tampa Bay Buccaneers in the Divisional Round. The quarterback retired on his 15-year anniversary, the day he first came to the Saints and paired up with Payton.