The Biggest Clue the NFLPA Is Likely Not Suing NFL, If It Lengthens Watson Suspension 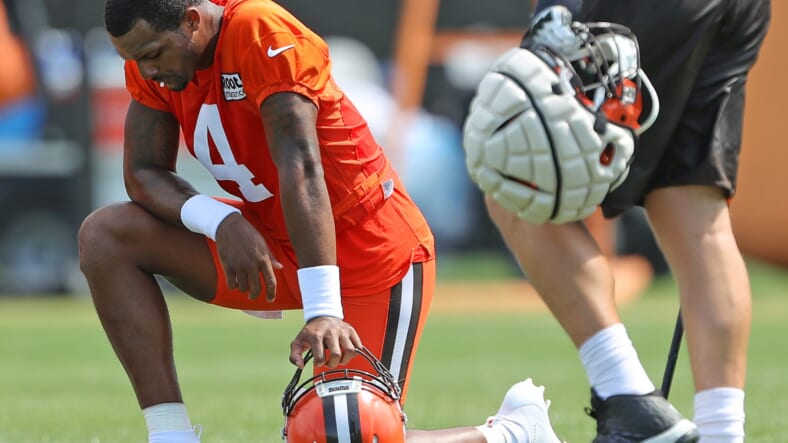 On airwaves and social media, there is lots of chatter about “federal court.” Will Roger Goodell increase Deshaun Watson’s suspension and if so, will the NFLPA challenge it in federal court?

Sports fans are used to the past rollercoaster rides that unfolded through litigation by the players union defending Tom Brady & Ezekiel Elliott against discipline by the league. The drama led to court “stays,” or “injunctions,” which delayed the league’s ability to exact discipline on the players. This made for some very dramatic play by plays. Often, Judicial decisions came down just before games were about to be played, leading to questions of will he play today or not?

Sports fans were mixed up in a legal quagmire, trying to decipher legalese when they just wanted to know how to adjust their fantasy lineups or whether their favorite players would play. Luckily, that’s why I created sports law entertainment and League of Justice, to explain all of that stuff in layman’s terms to sports fans who just want to enjoy the game.

On the flip side of those dramatic back and forths, many fans did not want to see players in legal trouble on the field at all. The same divide exists with Deshaun Watson and the allegations he faced. Many defend him and many do not. However, the NFLPA’s job is to defend the players and rumors have leaked indicating that if Watson is suspended by the league for a year or more, the Union will take the case to a federal court.

The NFL has appealed and Roger Goodell or his designee could very well increase Watson’s suspension by just a few games or up to a year as originally requested. Many reporters say the NFL wants a full year suspension.

So if Goodell does give Watson a year, will we see a full court battle? The NFLPA could try to go to federal court and challenge the arbitration BUT there is one glaring clue that it will not or at least if it does, it will definitely not succeed.

The night before Judge Sue Robinson, the arbitrator, issued her decision, the NFLPA released a statement. In the statement, it indicated it would accept Robinson’s decision to show that the new disciplinary process is legitimate. It asked the NFL not to appeal. Of course, this was likely because the Union knew the discipline would be around six games, on the low side.

However, in its statement the NFLPA also praised the “fair” and “full” process. Specifically, it said:

“A former Federal Judge – appointed jointly by the NFLPA and NFL – held a full and fair hearing, has read thousands of pages of investigative documents and reviewed arguments from both sides impartially. Every player, owner, business partner and stakeholder deserves to know that our process is legitimate and will not be tarnished based on the whims of the League office.”

Here, the NFLPA has already admitted, and in writing, that the process was fair! The two sides jointly chose the arbitrator, she reviewed thousands of pages of documents and arguments from both sides “impartially” and held a “full and fair” hearing. A court would laugh the NFLPA out of court if it challenged the arbitration process. Plus, this new process was JUST agreed to in the new CBA by both sides! It was newly negotiated and bargained for, another reason a court would not overturn it and likely not even review it.

If the NFLPA tries to merely challenge any appeals decision by Goodell or his designee as “unfair,” it would also not have a fairness argument. Again, the NFLPA agreed to this new procedure, including a right to appeal and have Goodell or his designee have the right to have final say. Furthermore, Goodell or his designee will be basing any increase in suspension on the facts found by Judge Robinson. Her factual findings of multiple violations of the personal conduct policy are set in stone and provide plenty of legal groundwork to justify a year suspension, possibly even banishment. She found the NFL met its burden of proof that Watson more likely than not sexually assaulted four women, engaged in conduct detrimental to the integrity of the NFL and put the women in a feeling of genuine danger of their safety.

The NFLPA issued a statement supporting the fairness and thoroughness of Robinson’s findings. Any federal appeal would need to prove procedural unfairness and cannot survive by merely complaining about an unfair “number” of games. Not liking the length of a suspension or discipline, does not provide a legal basis for a federal court to overturn an arbitration decision. The PCP gives broad discretion to the NFL to ultimately discipline players indefinitely or even remove them from the league, so long as discipline is imposed by the initial arbitrator. Plus, the lawyers for the NFLPA already know this. They have a legal obligation to only bring claims that have legal merit and cannot bring frivolous claims. Furthermore, Watson is tired from this whole situation, and may not want to engage in a full on year-long federal court legal battle that he’s likely to lose (much like Tom Brady backed down when his appeal lost, rather than petitioning the Supreme Court).

The NFLPA’s own statement would surely come back to bite it, if the Union even tried to bring this case to federal court. The worst case scenario here for Watson is that he sits out for a year and can petition for reinstatement. The best case scenario, in my opinion, is that he gets somewhere in the 8-12 game range, just short of a year.

Any talk of a federal court battle is just no longer realistic, especially considering, it already failed for Brady & Elliott when the arbitration process was way more unfair than it is today.

If you would like some more detailed info on whether Watson can try to get a temporary restraining order or emergency injunction to play week one. Check this article out:

Can Deshaun Watson Get a TRO & Play Week One? What Are His Legal Options?

For my full and easy summary of the highlights of Judge Robinson’s decision and reasoning, click HERE.