Report: Virginia RB Mike Hollins Is One Of The Survivors Of Fatal Shooting, Remains In Critical Condition 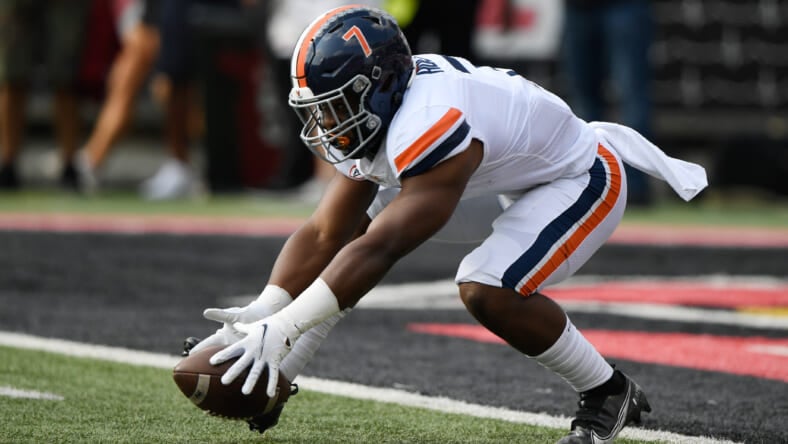 A fatal shooting took place in Charlottesville Sunday night, which led to the murder of three Virginia Cavaliers football players, leaving an additional two players injured. One of the survivors was identified as running back Mike Hollins. The redshirt junior is presently in critical condition, and is scheduled to undergo a second surgery. Officials say Hollins has been placed on a ventilator, but is expected to have it removed on Tuesday.

Attorney Gordon McKernan agreed to speak on behalf of Hollins’ mother and provided details on what he and Hollins’ mother, Brenda, believe happened that led to this tragic incident.

“It’s been hard,” McKernan says. “He is what you want your son to be. He’s that guy. He’s been at our house so much. We’ve gone on trips with them. He is polite, respectful, smart. He’s driven, tenacious and persistent.”

The lawyer added, “Mike was towards the front of the bus. Mike survived because he was farther away from the shooter. The other three were seated closer to the shooter. They had been on a field trip to see a play (in Washington D.C.) and when they came home on a bus, they pulled into the parking garage. The suspect, who apparently may not have been a part of the class but was on the trip … was asking one of the football players about a video game. The guy answered, and at that moment, he pulled a gun and started shooting. The belief from those on board was that he was targeting football players.”

WR Lavel Davis Jr., LB D’Sean Perry and WR Devin Chandler were the three players that were fatally shot. The suspect believed to be responsible for the shootings is Christopher Darnell Jones Jr., a University of Virginia student who was formerly a member of the Virginia football team in 2018. The suspect has been taken into custody after a successful manhunt, according to Virginia police.

Police chief Tim Longo announced that Jones is facing multiple charges, including three counts of second-degree murder and three counts of using a handgun in the commission of a felony. Jones has a criminal record that dates back to February 2021, which he allegedly failed to notify the school about. The suspect was hit with misdemeanor concealed weapons charges outside of Charlottesville.