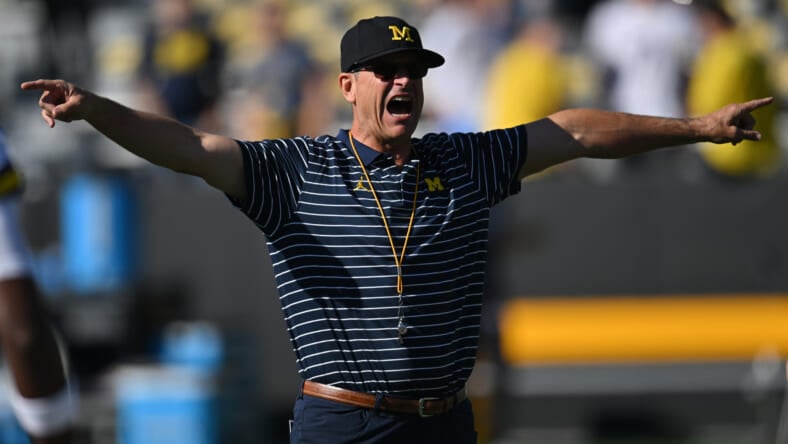 A major altercation took place between Michigan and Michigan State after the Wolverines defeated its rival 29-7 on Saturday. The incident reportedly left two Michigan defensive backs injured, one with a nose injury, according to Wolverines head coach Jim Harbaugh. A police investigation has been launched to thoroughly look into the incident. Harbaugh commented on the situation, stating that two Michigan players were injured.

“Two of our players were assaulted. I saw the one video; it’s 10-on-1. Pretty bad. I’m going to let our athletic director, Warde Manuel, address it with the authorities,” Harbaugh said.

“There needs to be a full, thorough, timely investigation. I can’t imagine this will not result in criminal charges. The videos are bad. It’s clear what transpired. This is very open and shut. As they say, watch the tape.”

“I’m coming from this from a perspective of being a parent,” the coach adds. “These young men are entrusted to me by their families and to our program, and we have the responsibility to each player to treat them like our own, and I take that responsibility very seriously. An apology will not get the job done in this instance. There should be serious consequences for the many individuals that are culpable.”

Two separate videos were reportedly recorded during the altercation. One of the videos showed a Michigan player being jumped by a crowd of Spartan players.

A second video shows one Michigan State player swinging his helmet over the head of a Michigan player. Four players for Michigan State were indefinitely suspended for their alleged roles in the fight. The players suspended are linebacker Tank Brown, cornerback Khary Crump, safety Angelo Grose and defensive end Zion Young.&nbsp;Defensive backs Ja’Den McBurrows and Gemon Green were identified as two of the Michigan players that were involved in the incident, and reportedly injured, according to officials.

Michigan State Vice President Allan Haller issued an official statement on the incident, saying that such behavior exhibited from the Spartan players is unacceptable and will not be tolerated under any circumstances. Haller also said that he’s been in constant communication with Michigan Athletics Director Warde Manuel as well as Big Ten Conference Commissioner Kevin Warren.